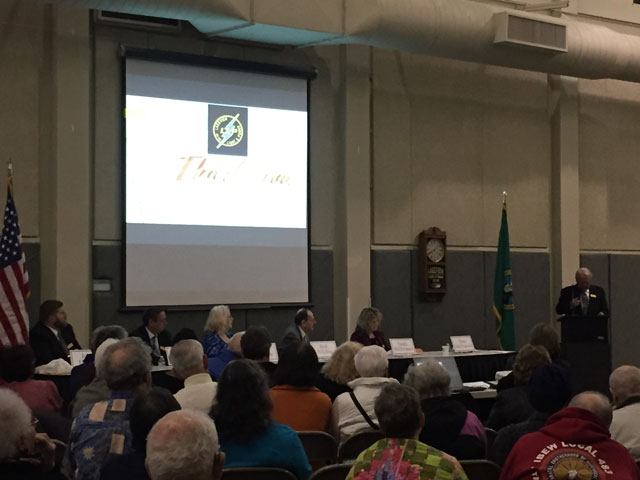 Following the invocation, led by Senior Pastor Walt Kellcy of First Baptist, McDermott introduced the 2017 scholarship winners. The board selected Mary Huynh and Jordan Roberts who both received a $2,500 award for college tuition next fall. In addition this year LLP sponsored a scholarship through Clover Park Technical Institute. The recipient of that award was Dawn Hefling.(Read more about the scholarship winners on page XX.)

General Manager John DeVore spoke to the utility’s progress over the last year in addition to personal information about himself since this is his first Annual Meeting coming to LLP in August 2016.  Power reliability for customers has been outstanding, said DeVore, who pointed out that in 2016, LLP experienced only xx hours of outage time.

DeVore highlighted other news and changes of the past year:

No utility rate increase in 2017.  Even though BPA has increased their wholesale rates for electricity LLP is not planning an increase for 2017.

An emphasis on community and volunteerism

President McDonald spoke about LLP’s commitment to the community with the Board and employees efforts to volunteer and raise money for those in need.  He reminded us that there are many families in Lakewood experiencing financial difficulties paying their utility bills this winter having record low temperatures. He also announced that LLP has established a $2M reserve to allow for unforeseen financial circumstances and which is good financial practice.

Two LLP Board of Director positions were up for election this year with four candidates running.  Voting took place on line as well as by mail and during the annual meeting from 6:00 p.m. to 8:00 p.m.  Tom McDonald was re-elected for another three-year term and will again serve as president.   Dr. Alan Hart was elected to the second position.

Retiring 45 year Board member Bob Schibig was recognized for his long service and presented with an antique clock with Lakeview Light & Water (the original name for LLP) in gold letters on the front glass. Thank you Bob for your dedication and diligent service.