On Bridgeport Way by the Hospital, On McChord Drive by the JBLM gate,

On 59th Street by the Towne Center, there he is again.

He’s not a superhero, but what he’s doing is absolutely super. He doesn’t wear a cape or some secret-weapon utility belt. Armed with only an orange reflective vest, a reach-grabber and a roll of trash bags, Scott is on a mission:

You’ve seen him. Picking up roadside trash here in town. You’ve thought “Who is this guy?” “Does he work for the City or the County?” “Where’s the rest of his crew?”

He doesn’t work for the City or County. And he is a one-man trash wrecking crew.

A native Washingtonian, Scott grew up outside of Spokane before moving with his family to Anacortes, where he attended high school. He received his Bachelor’s Degree and Teaching Certificate from Central Washington University, and taught middle school in the Wenatchee area until his retirement.

Working with kids in his career has fueled his sense of civic pride and community involvement, and his latest endeavor helping keep the streets of Lakewood clean just seemed like a natural extension of his nature.

Scott has been a resident for almost five years and considers Lakewood a town with “A lot going on”. He gets to meet many interesting people during the course of his day when he’s out collecting trash and recyclables, and lots of encouragement and appreciation from neighbors and passers-by.

Thanks to you Scott from the staff here at Lakeview, You’re a big part of what makes Lakewood great! 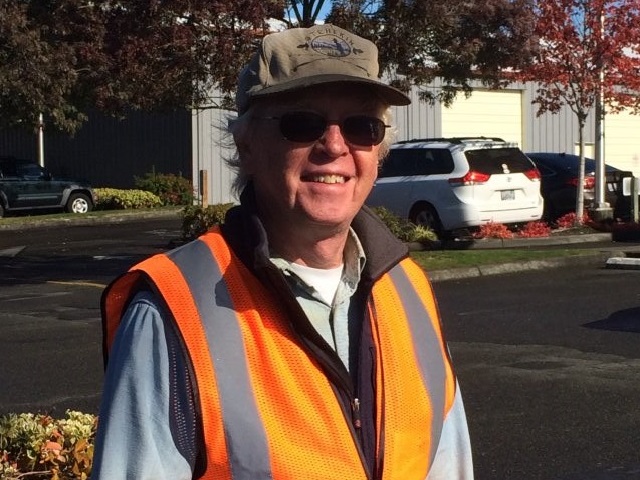