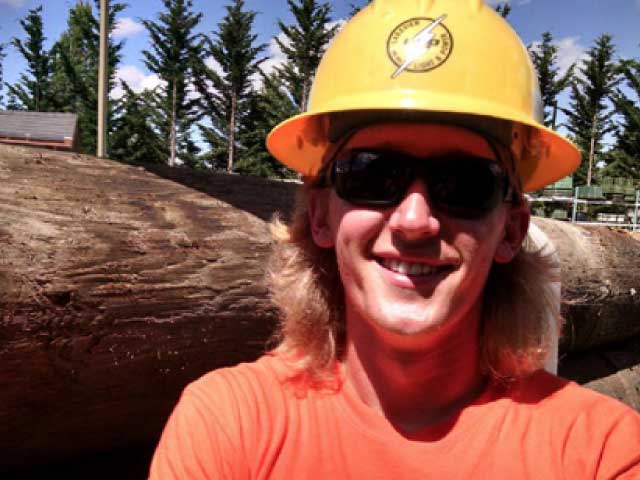 The outdoorsy, upbeat Larsen knows he’s in the right profession, saying: “I’m in this for the long haul.” Utility work offers Larsen a mental and physical challenge; the camaraderie of fellow field workers; and the opportunity to be outdoors, he said.

It’s also a great way to provide for his family. “You really have to be committed to the trade,” he said. “We go to school for three years, then undertake a four-year apprenticeship before testing to become a journeyman.”

Larsen grew up in Graham, WA where he worked alongside his father in a tree removal service.

He still makes his home in Graham where he lives with his wife and two young children.

The job of a lineman is one of installing, repairing and maintaining high voltage overhead and underground electrical power lines and auxiliary equipment.

Larsen routes or re-routes power lines over, under or around existing lines and structures, and regularly works in close proximity to energized lines. “I couldn’t imagine doing anything else,” Larsen said.