If Lakeview Light & Power were a baseball team, Operations Superintendent Mark Hadman would be our Cal Ripken Jr. While the “Ironman” played 21 seasons for the Baltimore Orioles, Mark sets the standard for longevity without equal. A graduate of Bethel High School’s class of 1977, Mark’s rookie year here at team Lakeview began in 1978 as a groundsman, digging ditches earning $5.00 per hour. Working his way up the ranks as one of LL&P’s first apprentices, he obtained his Journeyman status as both a Lineman and Meterman.

A true utility man in every sense of the word, Mark has served LL&P as Head of the Meter Shop, and Purchasing Director before being named as Operations Superintendent in 2000.

He always likes to keep the mood light around the office with his sense of humor and keeps the staff laughing when someone ends up on the wrong side of a whoopee cushion.

Mark has been married to his wife Lisa for 37 years, and they enjoy spending time with their four grandchildren, and doing a little snorkeling when visiting Maui.

In his spare time, Mark can be found working in his yard, tinkering in his garage, or brushing up on his French.

If you see Monsieur Mark, say bonjour! And thank you for your over 41 years of service to Lakeview. 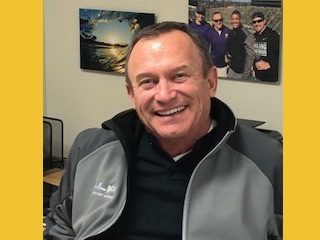