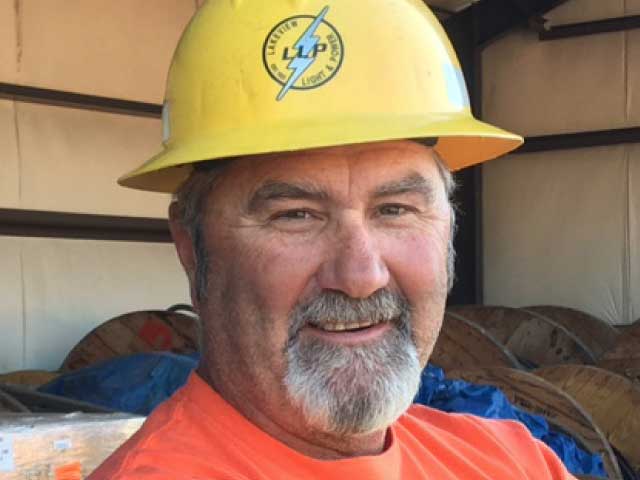 When Tim Johnston began his career with Lakeview Light & Power, he was digging ditches. He gradually moved up through the ranks to become an apprentice lineman, and then, in 1984, he earned his journeyman ticket.

In 1995, he was promoted to Line Foreman. “It’s the family atmosphere at the company that has kept me here,” said Johnston, who is a 38-year-veteran of LLP. “It’s provided financially for my family, allowed me to put my kids through college, and pursue some of my own dreams.” Johnston said that once you’ve been with a company for more than 20 years, you know the system well, and the people become your extended family.

Knowing the job like the palm of your hand – where all the underground lines can be found, and how to prioritize utility repairs after a storm – gives one a sense of comfort and a feeling of competence, he said. “I don’t want to go anywhere else,” Johnston continued. “I like my job, and I like going to work every day.

When an outage – small or big – occurs, we go out into the dark and get to work; when the lights and heat come back on it’s because we’ve done our jobs.” Johnston has been married to Marilyn Johnston for 36 years and has two grown children and six grandchildren with one on the way.

While every grandchild is his “favorite,” 3-year-old Tucker is often on his mind. Tucker has Duchenne muscular dystrophy (DMD), a genetic disorder characterized by progressive muscle degeneration and weakness.

DMD is caused by an absence of dystrophin, a protein that helps keep muscle cells intact. The disease primarily affects boys, but in rare cases it can affect girls.

“We’re hoping they come up with a cure so that he can live a long life,” Johnston said. “Funny thing is that you never think it’s going to happen to you. To look at him (Tucker), you’d never know he has DMD – except when he runs.” The Johnston family participates in fundraisers for muscular dystrophy in an effort to raise awareness about the disease and in support of finding a cure. He praised Seattle Children’s Hospital for the treatment his grandson receives – a treatment that helps Tucker walk, run, and climb just like any other typical 3-year-old boy.

In his free time, Johnston enjoys restoring classic cars. His favorite is the 1982 DeLorean or the “Back to the Future Car.” “When I got my kids through college I went ahead and bought my dream car,” said Johnston whose had more than a few kids ask him: Does it come with the “flux capacitor”?

At one point, Johnston did purchase a car phone charger that looks like the so-called “flux capacitor” in the Michael J. Fox movie. So, if and when he gets asked the tongue and cheek question, Johnston can point to his charger and say: Well, yes, I do!